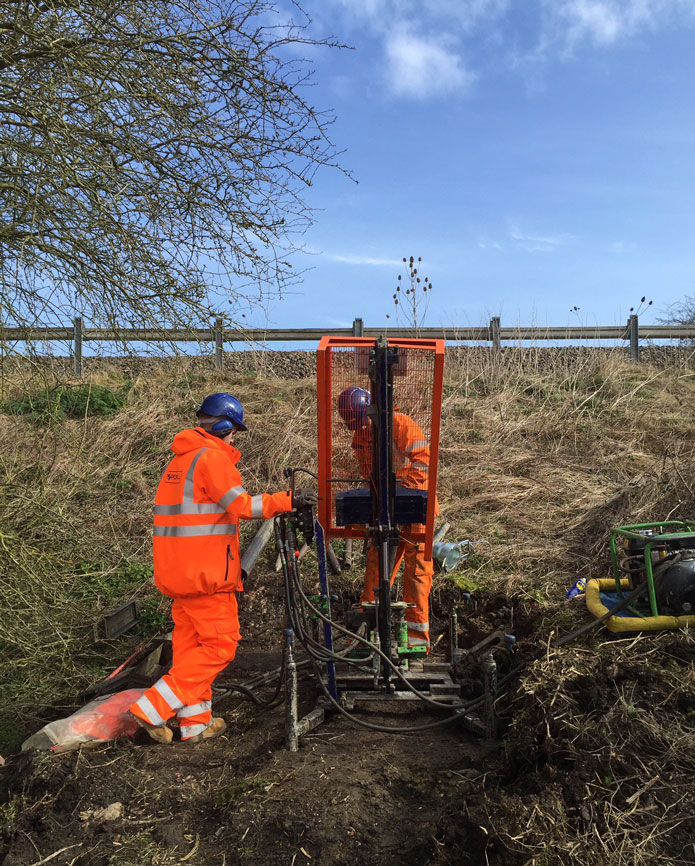 This was one of our more challenging sites. A slope failure (landslip) had occurred at this remote village in the Vale of Eden in Cumbria. Topdrill Ltd was instructed by J Murphy and Sons Ltd to undertake investigatory boreholes as well as install piezometers and inclinometers to gather data for slope stability analysis and the design of the remedial works.

The slope failure occurred after the extraordinary period of rainfall suffered by this region at the end of 2015 and into the new year, culminating with Storm Desmond. This had left large parts of the site as a quagmire, including the access ‘road’. Even a tracked ‘360’ excavator, brought in to assist in transporting drilling equipment to the elevated borehole locations, could not get sufficient traction to make it to the area to be investigated. This left the steep wooded and mud-slicked slopes as the only means of access to the proposed borehole locations.

It is in situations such as these that Topdrill’s LLAMR® rig comes into its own. LLAMR stands for Lightweight Limited Access Modular Rig meaning the rig can be readily dismantled into several parts, moved to the borehole location and re-assembled. This allows it to be used on sites that would otherwise be inaccessible because of restricted space or, as in this case, adverse conditions.

However, even with the LLAMR, getting the equipment up the steep, muddy slopes to the drilling locations would still be a challenge and would certainly be hazardous if the gear was to simply be carried by hand. We therefore used our motorised tracked barrows which, with their tank‑style tracks, can climb up very steep slopes while loaded up with heavy equipment.

Using this specialist equipment, and no small amount of effort from the two Topdrill crews, the seven scheduled boreholes were completed in the two-and-a-half days allocated. The boreholes were advanced to depths of up to 9m, being terminated on meeting rockhead/refusal as required by the job specification, with instrumentation installed in five of the boreholes as required.